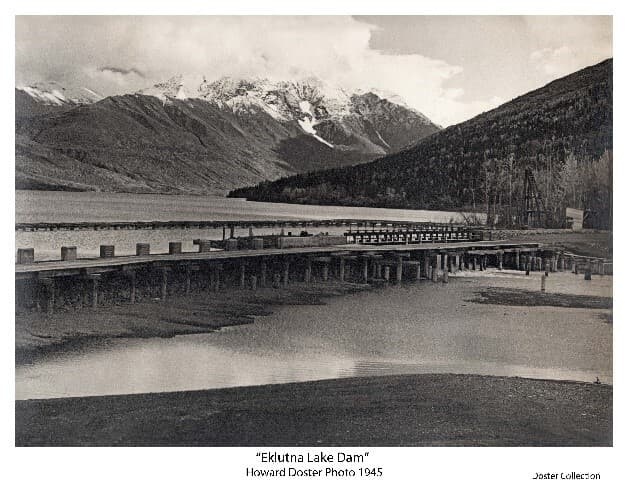 A view of Eklutna Lake dam as it appeared in 1945 is this month’s “Photo of the Month”.

Seven mile-long Eklutna Lake, located in the rugged Chugach Mountains above the Native village of Eklutna, has long been the primary source of drinking water for the city of Anchorage, and a significant source of hydroelectric power for surrounding communities.  This natural lake, at a mile wide and 300 feet deep, is fed by Eklutna Glacier and run-off from surrounding mountains.  It was formed when accumulated gravels left behind as the last glacier to fill the valley melted away, re-enforced by landslides from steep adjacent mountains, effectively dammed the drainage.

The man-made structure in the photo, captured by Army photographer Howard Doster, was constructed in 1941 to raise the general level of the lake and provide management control of the water level through the penstock gates seen at the far end of the dam.  Over the years several dams have been constructed and replaced at this general location, controlling the outflow to Eklutna River below as it flows on to Cook Inlet.  The structure in the photo replaced an earlier one constructed in 1929 to compliment another diversion dam and powerhouse some seven miles downstream that for many years produced power for Anchorage.

The pictured dam was upgraded in 1955 when the Bureau of Reclamation tunneled into the bottom of the lake to draw water to the new Eklutna power plant on the old Glenn Highway along Knik River.  The rehabilitated dam was significantly damaged by the 1964 earthquake and was subsequently replaced by a taller earth and rock fill dam located just downstream.

Sargent Doster was a press photographer stationed at Fort Richardson in Anchorage and made at least one trip to the Matanuska Valley to capture photos of the area.  We are fortunate to have at the Museum a number of his high quality photos of Independence Mine and various local farmsteads.

If you visit the site of the old Eklutna dam today you may see aging pilings and other evidence of the bygone structures that played such an important part in the history of Anchorage and communities in the Matanuska Valley.