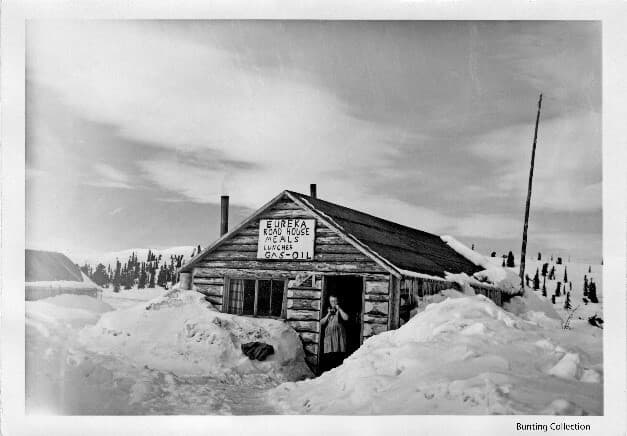 This month’s photo came to the Museum by way of Casa Grande, Arizona where it was discovered at a flea market in an album containing a number of other Matanuska Valley pictures.  Palmer resident “Red”Bunting spotted the familiar images and purchased the album to give to the Museum.  We have no information on who took the pictures or how they managed to wind up so far from Alaska, but their return and acquisition by the Museum make an important contribution to our historical collection.

Eureka Roadhouse was constructed about 1936 at Eureka Summit along the trail which would become the Glenn Highway in 1945 connecting Anchorage with the Valdez-Fairbanks road at Glennallen.  We can infer from the sign’s offer of gas and oil that the photo was taken after the road was in place, but sometime prior to the roadhouse occupying a larger structure nearby in the late 1940’s.  The person in the doorway is not identified, but might be “Ma” Warrick who, with her husband, first established the roadhouse to serve hunters and prospectors in the area.

Now called “Eureka Lodge”, the business still operates at the same location, but with a considerably expanded facility at mile 128 on the Glenn Highway north of Palmer.  The original log building seen here is still in place near the newer building which continues to serve “MEALS,LUNCHES, GAS-OIL” to motorists, hunters and winter recreationists, as well as visitors who drop in by air on the small lake behind the lodge or on the landing strip across the highway.