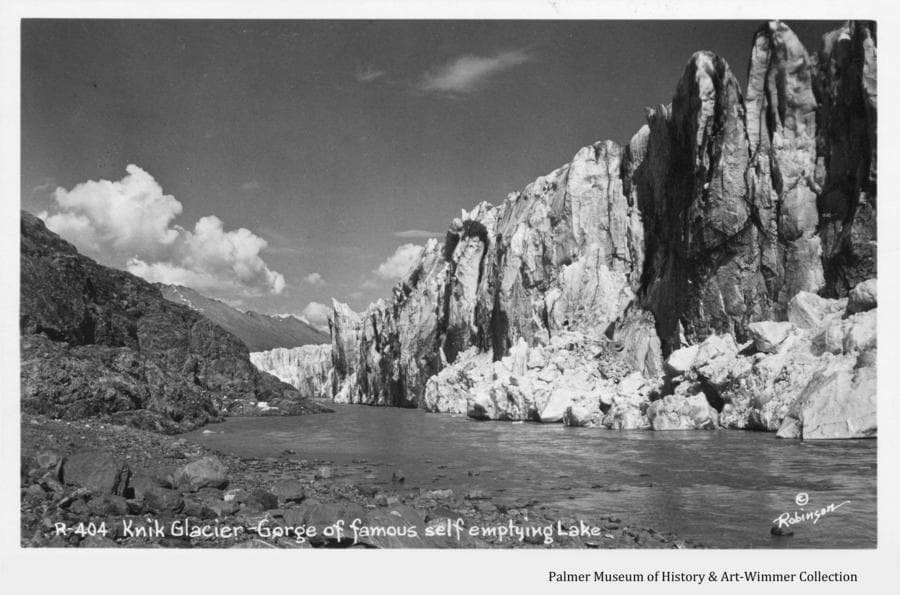 The photo above by Robinson, from the Museums’ Wimmer Collection, is of the face of Knik Glacier viewed from below at the bottom of the gorge after waters of Lake George had drained out.  For many years the glacier would annually advance to abut the side of Mount Palmer, viewed at left in the photo, forming a dam on a large side valley.  With spring and summer melting, the valley would fill with water (Lake George), covering as much as 25 square miles and as deep as 160 feet, until the water spilled over the ice and eroded a channel to escape.  This erosion of the glacier face and release of the lake water became a dramatic event of calving ice and violent water flowing through the 300 foot deep gorge in which this photo was taken. Records from the U.S. Geologic Survey covering the years 1958 through1968 show this annual breakout occurring each year from 1958 to 1963, and 1964 to 1967.

In 1963 the glacier did not advance to form the dam and has not done so since 1966.   The dramatic discharge of as much as 150 million gallons of water per minute flooded the river valley below, including riverside homes and the community of Matanuska. As the surging water undercut the ice, sections of the glacier face as long as a city block, and as high as a 15 story building would calve into the raging water below as the lake emptied in a matter of 12 to 15 days.