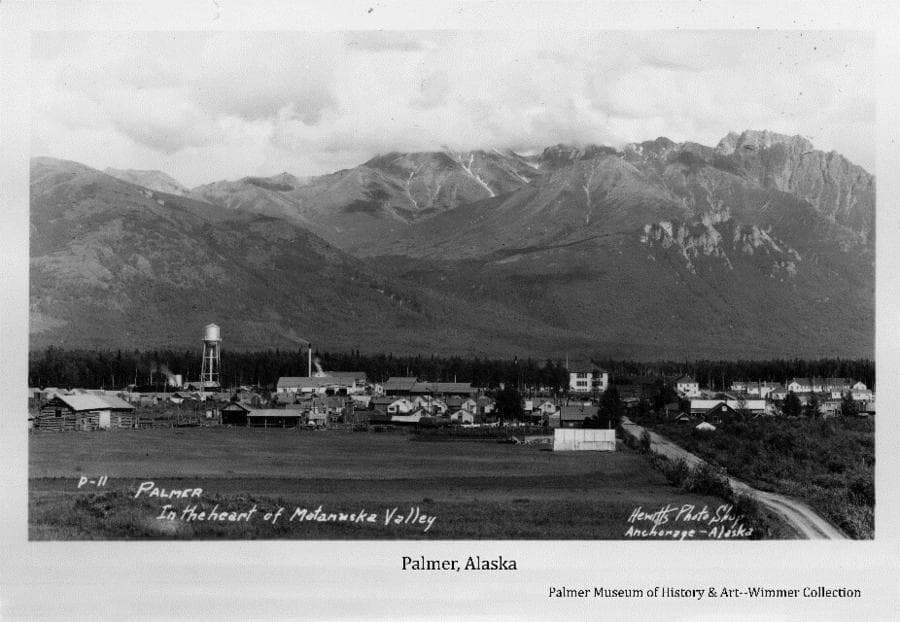 Over the years many photographers have captured the view we consider this month. This photo was taken from the western side of John Bugge’s homestead, atop “Bugge’s Hill” where the Peak Inn is located today. Interesting elements made the view popular—the homestead fields and log barn in foreground, the renowned “Matanuska Colony” community buildings in middle ground, and the rugged mountains that anchor the east end of the valley as a backdrop. Commercial photographers, such as Hewitts of Anchorage, found the image made a popular picture postcard for sale to be mailed to folks “back home” or kept in family collections.

The Museum collection includes numerous photos similar to this one, taken at different times and different seasons over the years from the same viewpoint. When viewed together, and arranged in the proper sequence, it’s intriguing to see the changes that are evident over time. In that regard, understanding when things occurred—when buildings were constructed and are evident or missing in a photo, for example—is extraordinarily helpful in understanding when an undated photo was taken.

We don’t have a precise date for when this month’s image was captured, but we can see several clues. It’s obvious that summer is well along as snow on the mountains is essentially gone. The water tower is in place and painted. It was erected as a pre-fabricated “kit” sent up from the Seattle Boiler Works and welded together by a three-man local crew in summer of 1936. We can see scaffolding is removed from the school building, indicating that the exterior construction that began in 1935 and extended into 1936 was completed. The train depot (at center) was constructed in 1936 and appears complete. The hospital (at right) was dedicated in May,1937 and appears complete.

At the same time, numerous tents are still visible, left over from the “Tent City” days of the Colonist’s arrival in 1935. Construction of Koslosky’s new store, which opened in 1945 is not in evidence. Nor is the Valley Hotel, constructed throughout 1947 for a dedication opening in 1948. The hospital burned in spring of 1946. Given the evidence above, we may assume the photo was taken sometime after 1936, perhaps as early as 1937.

Knowing the dates of when things happened, and relating that information to what appears in a photo,allows us to arrange this month’s image among the two dozen similar views in our collection, placing it sometime between summer of 1937 and spring of 1945.  Future discovery of when things happened(such as when that hump in the “Wasilla Road” at the right of the photo was flattened out), plus dates identified for those other similar photos, may help confirm a more specific date for this image. By arranging this photo in the proper sequence with others allows us to better visualize how Palmer has changed and grown over the years.